The Time I Hung Out With a Great White Shark

Sharks absolutely terrify me. While I know they’re not the bloodthirsty monsters that will strategically hunt you down like in movies like Jaws and 47 Meters Down, sharks are still humongous, scary-looking creatures that could kill me in a heartbeat. What’s my second greatest fear, you ask? Water I can’t see the bottom of easily. Specifically, oceans, because swimming around in that water I can’t see the bottom of there might be a shark.

I also pride myself on being an adrenaline junkie. I do things specifically for the satisfaction of checking them off my bucket list. I’ve been skydiving, love traveling to foreign countries solo. I’ve even found myself five feet away from a cheetah while on safari in Kenya. Because I aim to be adventurous, I decided to put myself right in the middle of my worst nightmare.

I awoke at the disrespectfully early hour of 3 a.m. at my hotel in Cape Town. The sun wouldn’t be rising any time soon. Regardless, I felt equal parts wide awake from adrenaline and nauseous from the thought of what the next several hours would bring.

I met up with six other students studying abroad in the lobby and we waited for our tour guide. Seven of us crammed into a car meant for six people for the drive to Gaansbai, an ocean-side town internationally known for its shark-filled waters. We headed straight into Shark Alley, the name locals gave the stretch of water popular for cage diving.

I nodded in and out of a light sleep until we arrived at our tour company in Gaansbai, fashionably late for the presentation on emergency procedures (a really great thing to miss for someone terrified of everything ocean-related).

The tour company crew quickly sized me for a wetsuit and handed me a towel and waterproof bag for the belongings I planned to bring on the boat with me. They warned us not to bring any electronics we wouldn’t want to get wet. I slipped the GoPro I specifically brought on my trip for this moment into my waterproof satchel and walked through the town with the rest of the divers to the harbor.

Stepping onto the boat, my heart really started to pound. I’d crossed the point of no return. My friends and I climbed the ladder to the boat’s second level in the freezing morning air for an unobstructed view of the water surrounding us.

“You really did it this time,” I thought.

The boat drove deep into the Atlantic until land became a distant dark mass on the horizon. This excursion happened in June, winter in South Africa, making the water extra choppy. The giant rolling waves we crossed over convinced me I’d reach my end before even getting in the water with a shark.

The boat stopped. At the captain’s call, I descended to the boat’s first level. I struggled into my wetsuit with the rest of the nervous divers. I’d never worn one before, but I quickly learned they do a great job of making you feel like the breath is being squeezed right out of you.

My eyes met the black metal cage attached to one side of the boat. A crew member threw a tuna head into the water as bait while I crammed my foot into a wetsuit bootie. I finished talking down my nerves just as I saw a shark fin pop out of the water to my right just feet away from me. I screamed—out loud.

The captain called for volunteers for the first round of dives and I hesitated. Two of my friends climbed into the cage and I stood entranced for the next 15 minutes as two different great white sharks neared the cage.

The sharks took my breath away. At six to 12 feet long, their shiny, muscular bodies still moved gracefully. I couldn’t take my eyes off them as they emerged out of the water, showing off all their jagged teeth as they chomped on the tuna bait in front of the cage. Despite their intimidating features, it struck me the sharks were nervous too. The captain continuously reminded divers not to make quick movements or yell underwater because bubbles frighten sharks away.

This realization gave me the confidence boost I needed to get into the water on the next round of dives. Volunteering first this time, I pulled a diving mask over my head and slid into the cage. My teeth chattered but I couldn’t tell if I was freezing cold or sheerly panicking. I gripped the metal bar I would use to hold myself underwater with such force my knuckles turned white. I tried to remember to breathe but couldn’t focus on anything but the vast body of water around me. 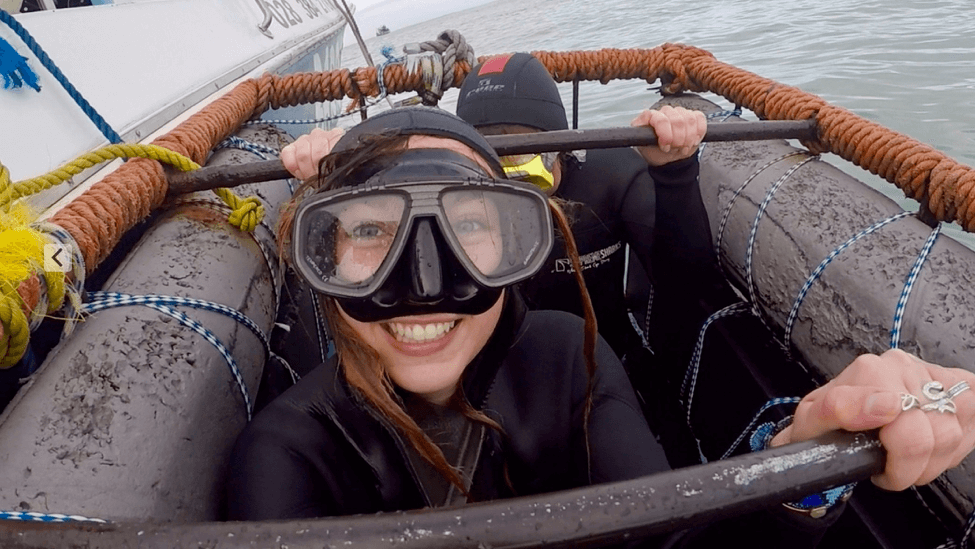 It felt like mere seconds until the captain yelled out “Down, down, down, down!” and I frantically pushed myself underwater, swallowing a big mouthful of salt water in my frenzy. I screamed in bubbles as my eyes landed on the dark mass swimming through the cloudy water. I have never been more transfixed.

After that initial encounter, the fear dissipated and I became addicted to the thrill. When else would I be this close to a great white shark again? The captain kept my group in the water for a couple more shark sightings and then asked us to rotate out to give others a chance in the cage. At the end of our outing, the crew asked if anyone wanted a second go before we returned to land. I eagerly clamored back into the water.

The next shark siting made the decision well worth it. I will forever have the image of the serene great white shark devouring the tuna bait seared in my mind.

I smiled the rest of the day. Now that I scratched the most intimidating item off of my bucket list, I felt like I could conquer anything. I still want to try surfing, but I decided I had my fill of the ocean for a couple years.